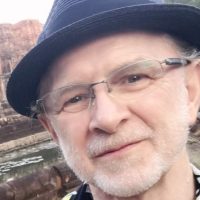 “It is difficult to understand why we wouldn’t use harm reduction as part of our response to drug use. We mandate seatbelts and helmets; Medicine provides symptomatic relief side by side with treatment for a problem. Harm reduction is logically and experientially essential to addressing problematic, indeed all, drug use. It is the key to responding as a community to the most common human traits – wanting to know, to experiment; wanting at times to have some time out; a desire to savour life.”

Gray’s work related to HIV and drug use began in 1986, as an organizer and lobbyist for community involvement in HIV prevention and treatment services in New South Wales (NSW). This included membership of the Trade Union Working Party on AIDS, Education Committee Convenor and President of the AIDS Council of NSW, President of the NSW Users and AIDS Association, Vice-President of AIVL and Standing Committee Member of ANCA. In 1989, he joined the New South Wales Health Department, developing and managing the State’s HIV Education Programmes for drug users, gay men, the health sector and tertiary education. In 1996 he moved to the NSW Drug and Alcohol Directorate as Manager for Programme Planning in Drug Treatment Services.

Gray also worked with international and regional non-government organizations in Viet Nam, Cambodia, and Thailand, and as a consultant to UN agencies and the ADB. After a year with the Asian Harm Reduction Association (AHRN) Mr Sattler joined the WHO Western Pacific Regional Office as the first Technical Officer Harm Reduction in 2002, developing and securing funding for a Bi-regional Harm Reduction Strategy (with SEARO) and concluding an agreement with the United Nations Office on Drugs and Crime (UNODC) Regional Centre for East Asia and the Pacific. When UNODC became UNAIDS lead agency on HIV/drug use he was appointed Regional Adviser HIV/AIDS, establishing a regional HIV team as part of the growing commitment by the global community to a dedicated response to HIV in relation to drug use, prison settings, and human trafficking. His last post was as UNODC Country Adviser HIV for Indonesia and PNG.