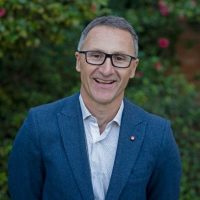 Richard Di Natale is a former Australian Senator and was leader of the Australian Greens from 2015 to 2020. Prior to entering the Senate, Dr Di Natale was a general practitioner and public health specialist who worked in Aboriginal health in the Northern Territory, on HIV prevention in India and as a drug and alcohol clinician in regional Victoria. Richard now works as a public health advisor for Cohealth, a large, not for profit community health service. Richard says ‘Australia was once a leader in Harm Reduction policies and it’s time we were again!’