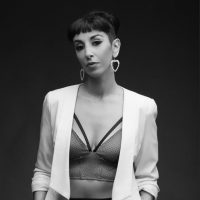 Beginning her career in professional photography just 8 years ago, Michelle Grace Hunder already has two separate portrait series in the National Sound and Film Archive of Australia and is considered one of the most revered Australian Music Photographers. She is also a documentary film maker, producing the critically acclaimed Music Documentary “Her Sound, Her Story” as well as host of the weekly hip hop show on Kiss FM “The Scenario”.